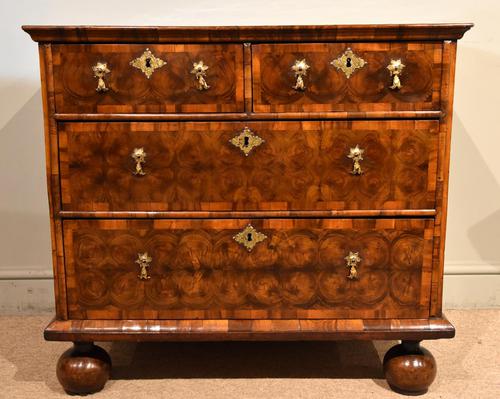 Walton House Antiques offers the discerning buyer an extensive range of fine quality antique furniture, clocks and works of art, from our spacious 4,500 sq foot showroom in the centre of Mere, Wiltshire, just off the busy A303, with ample free parking.

REF: WH8345 / LA406021
£12,800
€15,109
$15,540
+44 1747 860050
Certified DealerApproved listing1246 sales by dealer
Certified DealerApproved listing1246 sales by dealer
Description
This is a rare and beautifully preserved late 17th century William and Mary period olivewood oyster chest of drawers. The top having a series of concentric inlaid patterns bordered by a further series of interlocking circular designs. The drawer fronts all with elaborate oyster work with olivewood crossbanding and the sides of the chest also with oysters bordered with holly. The feet most unusually are original, while the handles, if not original are sympathetic replacements in the original style. A fascinating aspect of this piece, is that the central drawer is lined with a printed sheet of illustrations by Thomas Baston. These illustrations, the originals of which are now in the British Museum, were created in the late 17th century at a similar time to when the chest was made. Baston worked in the Royal Admiralty as a draughtsman and became much celebrated for his work. All of the items that we advertise for sale have been as accurately described as possible and are in excellent condition, unless otherwise stated. Please note that we are also able to arrange a full shipping service for our customers. We look forward to being of service.

Walton House Antiques Ltd has clarified that the 17th Century Olive Wood William & Mary Chest of Drawers (LA406021) is genuinely of the period declared with the date/period of manufacture being c.1690

A selection of items from Walton House Antiques Ltd