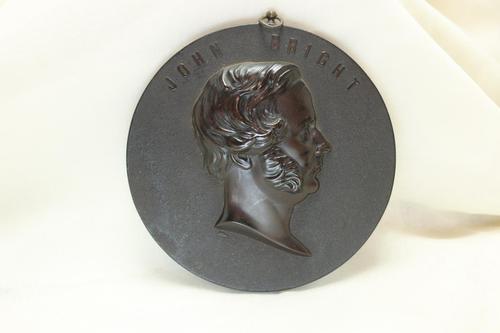 Established by Don and Jenny Patterson in 1992, China Rose Antiques offers a wide range of fine china including Royal Worcester, Wileman and Shelley, Royal Doulton, Moorcroft and much, much more. We also carry a range of sterling silver, treen, boxes and other diverse antiques and collectables. We are situated in Geelong, Victoria, Australia and offer safe and secure packaging and prompt mailing worldwide. In our packing we use a 100% biodegradable and compostable void filler and recyclable cardboard boxes.

REF: 4727 / LA401870
£165
€187
$203
Secure Payments By
+61 407527857
Certified DealerApproved listing
Certified DealerApproved listing
Description
This Bois durci plaque depicts John Bright (1811-89), who was British statesman, and considered one of the greatest orators of his generation. It is from a series of ornamental plaques depicting well known figures from royalty, politics and the arts. Bois Durci (a literal translation is "hardened wood") was patented in Paris in 1856 by Francois Lepage and was achieved by mixing a very fine sawdust, usually ebony or rosewood, with albumen-the sticky substance found in blood or eggs- and combining the two in a steel mould under heat and pressure. On the reverse of this plaque is the moulded name Bois Durci, and on the front, just below Bright's image, is a small, moulded bird's wing which is another identifying feature.

China Rose Antiques has clarified that the Bois Durci Plaque of John Bright (LA401870) is genuinely of the period declared with the date/period of manufacture being c.1880

It is in very good condition

This Bois Durci Plaque of John Bright is located in Australia

A selection of items from China Rose Antiques