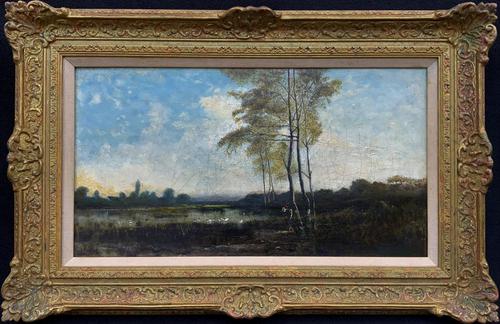 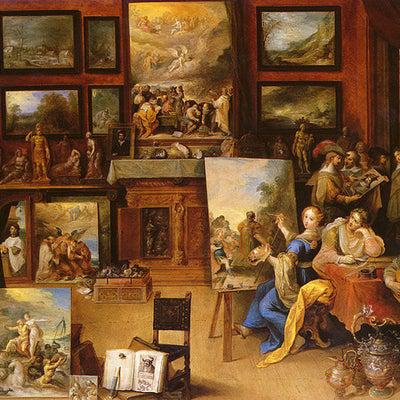 About Us:- Artsonline.org.uk is a family run business with over 30 years of combined industry experience, so customer satisfaction is paramount to us! Why choose artsonline.org.uk? Artsonline.org.uk is proud to be one of the very few companies that offer a genuine 30-day-money-back refund policy. (minus the return cost of postage) We stock a wonderfully eclectic mix of over 300 pieces at any one time, dating from the 16th Century, right through until our very latest and contemporary, 21st Century art. Delivery:- Artsonline.org.uk ships worldwide, using only fully insured, priority, and tracked delivery services. Great care and much time are taken over the safe transportation of the Fine Art & Antique pieces which we sell. We pack extremely carefully, so you can rest assured that your piece will arrive with you in perfect condition. For larger paintings, antique furniture pieces and fragile items which cannot be sent via the normal postal services, we use door-to-door delivery providers, who will deliver your piece in a timely manner, within approx. 7-14 working days. Returns Policy:- Artsonline.org.uk provides a genuine no-quibble 30-day money-back refund policy (excluding the cost of Postage & Packaging). If on an extremely rare occasion a piece should arrive damaged, artsonline.org.uk will refund the entire purchase price, together with any return shipping cost.| Payment:- We are able to accept payment via all Major Credit | Debit Cards | Bank Transfer (BACS) | PayPal | Square |Telephone 01749 595 507 Outside of the UK? Telephone + 44 (0)1749 595 507... See more
View Dealers Items

REF: LA384404
£1850
€2180
$2337
Secure Payments By
Certified DealerApproved listing520 sales by dealerFree Delivery
Certified DealerApproved listing520 sales by dealerFree Delivery
Description
This is an Exceptional original 19th Century French Impressionist Riverscape Oil on Board Painting depicting an expansive rural landscape with a lone figure standing on the banks of a large river with a group of swans and a small hamlet in the far distance. Circle of: 'Paul Désiré Trouillebert' (1829-1900) from Paris, France Biography: Paul Desire Trouillebert was born in Paris in 1829. He attended the École des Beaux-arts, where he studied under Antoine Auguste Ernest Hébert and Charles Jalabert. The young artist developed a passion for portraits and nude figure studies. He debuted at the Salon in Paris in 1865 with Portrait of Mademoiselle A. Shortly thereafter, Trouillebert received a near-continuous flow of portrait commissions from important clients. He was also renowned for completing a remarkable set of historical works that depicted the building of the railways around Paris in the 1880s. By the 1870s, Trouillebert, like many of his contemporaries, was inspired by the works of the Barbizon school. His oeuvre broadened to encompass the pastoral, riparian landscapes near and around Paris. Trouillebert depicted figures embedded in the surrounding landscape, sunsets over fields, and riverbanks bathed in the atmospheric morning light. He utilized a subtle, muted palette and often worked en plein air and on the panel. Trouillebert drew inspiration from scenes of rural life as well as the rich folk traditions of small French towns. As the critic Theodore de Banville wrote of Jean-Baptiste Camille Corot in 1861, “this is not a landscape painter, this is the very poet of landscape, who breathes the sadness and joys of nature.” Trouillebert’s sense for nuances, the subtlety of his silvery grey-greens, and his effective use of mist prompted many to compare him to Corot. Although Trouillebert was amply inspired by Corot’s themes, he added his distinctive atmosphere to each painting, especially in his scenes of fishermen on the riverbanks of France. His works are on display at the Musée des Beaux-arts, Reims; the Musée d’art histoire et archéologie, Evreux; the Musée Crozatier and Musée des Beaux-arts, Dijon; the Musée des Beaux-arts de Rouen; the Musée des Beaux-arts de Dole; the Musée Cantini, Marseilles; the Musée des Beaux-arts et Musée Marey; the State Hermitage Museum, St. Petersburg, Russia; the Metropolitan Museum of Art, New York; the Cleveland Museum of Art and the Walters Art Museum, Baltimore. The outstanding attention to detail is truly breathtaking, and it is clear for all to see from these images that the artist who executed this particular work was an extremely close member or friend within Trouillebert's circle. Entirely original throughout and free from any previous repair or restoration. Mounted within the original and conforming gilt-swept frame which suits the painting marvellously. One could easily mistake this piece and attribute it to the artist himself, such is the likeness and quality of the work! Attributes: Oil on Board Unsigned Circa: 1880-1890

Artsonline.org.uk has clarified that the Circle of Paul Désiré Trouillebert '1829-1900' 19th Century Impressionist Landscape Oil (LA384404) is genuinely of the period declared with the date/period of manufacture being 1880-1890

As stated above, the work is entirely original with delightful areas of aged craquelure running through parts of the paint surface. 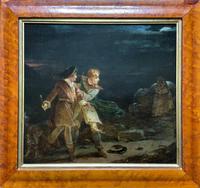 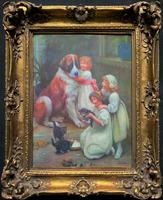 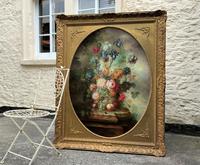