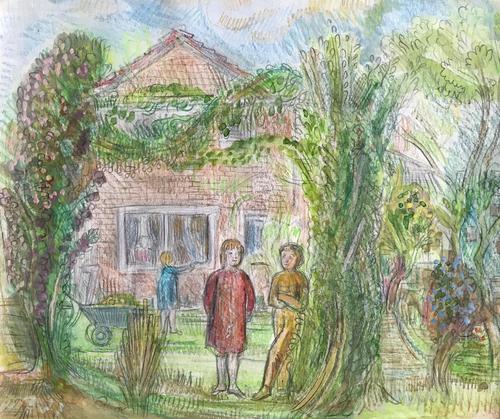 REF: 2944 / LA428530
£45
€50
$55
Secure Payments By
07748631022
Certified DealerApproved listing103 sales by dealerFree DeliveryAvailable for local pick-up
Certified DealerApproved listing103 sales by dealerFree DeliveryAvailable for local pick-up
Description
Fine watercolour and crayon painting by Ruth Collet. Her work is held by many Galleries including the Ben Uri in London. Other works can be seen on the Art UK web site. Painter, printer and illustrator Ruth Collet (née Salaman) was born into a Jewish family in Barley, Hertfordshire, England in 1909. Her father was the botanist Redcliffe N. Salaman and her mother was the Hebrew scholar Nina Ruth Davis; among her cousins were the artists Michael Jonathan Salaman and Merula Salaman (later Guinness). Ruth studied drawing and painting at the Slade School of Fine Art under Henry Tonks and Philip Wilson Steer (1927-30), then etching at Atelier 17 in Paris under Stanley William Hayter (1932-35), also later studying at the private art school of Kathleen Browne and her Polish husband Marian Kratochwil after her return to London. Before her marriage to musician Robert Collet, Salaman was much associated with the East London Group; she went on to exhibit widely with the London Group, the Royal Academy, New English Art Club, the Royal Society of British Artists, the Society of Women Artists and the Women's International Art Club. She held solo London exhibitions at the Annexe Gallery (1982), the Sue Rankin Gallery (1987), the Sternberg Centre for Judaism (1991) and the Moss Gallery (1991). She had three major exhibitions at Ben Uri Gallery: with Adele Reifenberg and Julius Rosenbaum in 1950; with Lottie Reizenstein and Frances Baruch in 1970; and with Margaret Levinson in 1978. Her work was influenced by Chardin, Daumier and Samuel Palmer. Ruth Collet died in Middlesex, England in 1901. Her work is held in UK public collections including the Ben Uri Collection and the University of Edinburgh.

21st Century Gallery has clarified that the Original Mixed Media Painting 'Children in a Garden by Ruth Collet 1909-2001. Signed (LA428530) is genuinely of the period declared with the date/period of manufacture being c.1975

This Original Mixed Media Painting 'Children in a Garden by Ruth Collet 1909-2001. Signed is located in United Kingdom