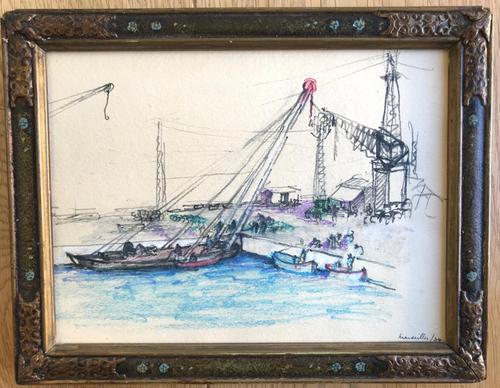 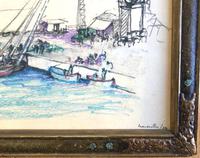 REF: 2921 / LA424115
£70
€78
$86
Secure Payments By
07748631022
Certified DealerApproved listing103 sales by dealerFree DeliveryAvailable for local pick-up
Certified DealerApproved listing103 sales by dealerFree DeliveryAvailable for local pick-up
Description
Mixed media of chalks and pencil of Marseilles harbour in 1934. Framed in a period moulding. Barbara studied at the Royal Academy schools in the early 1930's and won the silver medal for drawing. On leaving the Academy she worked as a portrait painter. After the war she specialised in landscape painting and continued to accept portrait commissions. She has always taken a keen interest in nature with her family friends included George Edward Lodge and Lionel Edwards, the great wildlife artists of the 20th century. Both these painters encouraged her to paint in the Scottish Highlands and sketch nature as she observed it. She exhibited widely and had many one woman exhibitions around the world. Her work is in many private and public collections. Notable exhibitions have included "Views of London and Paris". In 2004 her work was shown at the Burlington House Gallery in Piccadilly.

21st Century Gallery has clarified that the Original Mixed Media Painting 'Marseilles 34' by Barbara Lady Brassey 1911-2010. Inscribed and Dated 34. Framed (LA424115) is genuinely of the period declared with the date/period of manufacture being 1934

The frame and painting are in good condition