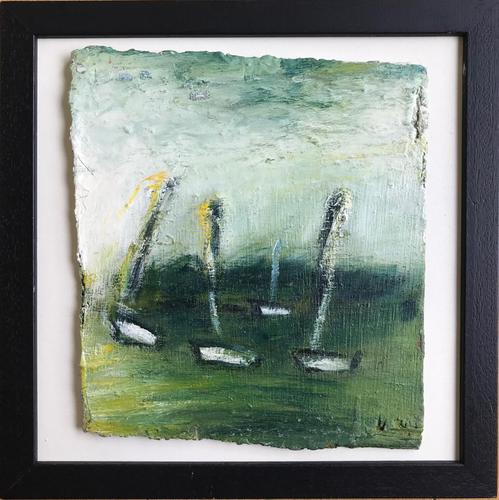 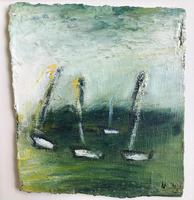 Original Oil on Board 'boats off Walton on the Naze' by Doreen Heaton Potworowski. 1930-2014. Initialled c.1970. Signed on the on Reverse

REF: 2867 / LA409212
£175
€207
$212
Secure Payments By
07748631022
Certified DealerApproved listing44 sales by dealerFree Delivery
Certified DealerApproved listing44 sales by dealerFree Delivery
Description
Doreen was born in 1930 and after leaving school studied art at the Corsham Academy in Bath. At that time the Academy was at the forefront of modern thinking in terms of art education and trends. When she arrived there as a new student, the teaching staff included young artists including, Peter Lanyon, Kenneth Armitage, Henry Cliffe and a slightly more elderly Peter Potworowski. Peter Potworowski (1889-1962) was a Polish émigré who had escaped from Poland in 1943 after the German invasion. Peter arrived in Britain in 1943 and in 1952 became Professor of Painting at Corsham. He was an extremely worldly wise man with a great experience of life, having fought in Russia in 1919 and worked with Bonnard and Picasso in the 1920’s. He was an established painter with an international reputation. Within a few months of arriving at Corsham, Doreen had taken on the role of Peter’s assistant and they fell in love. Contemporaries have described the relationship as an immediate meeting of minds and ideals. Jan Potworowski, Peter’s son recalls his father saying that ‘when Doreen looks at me it’s like a beautiful Jersey cow spying a field of fresh lush grass’. Doreen graduated in 1953 and took up a teacher training position in a school. This turned out to be an unhappy experience and her writings of the period reflect her anxieties and fears that she was not cut out to teach. Eventually she resigned and from 1954 until 1958 she and Peter travelled extensively, leading a Bohemian life style that Doreen recorded in her diaries of the period. In 1958 Peter was invited back to Poland to become Professor of art in Poznan and Gdansk. This was meant to be a short term appointment but they were invited to stay and it was there they married shortly before Peter’s death in 1962. In 1963 Halima Nalecz, the Polish aristocrat owner of the Drian Gallery in London gave Doreen a one woman show which was a great success. In her introduction to the exhibition Halima Nalecz says “ her instinct as a painter leads to an almost childish honesty of expression. But it is this quality which makes her work valuable and beautiful for us.” After Peter’s untimely death Doreen continued to live in Poland, painting and translating. She produced an extensive body of work while there, staying some 30 years as a foreigner in a repressive regime. She earned a living, such as it was, as a translator and exhibiting artist. Life was hard for her and she tried to visit her family in Britain once a year. She eventually returned to East Anglia in the mid 1980’s to look after her father in East Anglia, and it was there thar she died in 2014. Chippenham Museum has recently purchased a number of her oil paintings for their permanent collection of Corsham artists.

21st Century Gallery has clarified that the Original Oil on Board 'boats off Walton on the Naze' by Doreen Heaton Potworowski. 1930-2014. Initialled c.1970. Signed on the on Reverse (LA409212) is genuinely of the period declared with the date/period of manufacture being c.1970

This Original Oil on Board 'boats off Walton on the Naze' by Doreen Heaton Potworowski. 1930-2014. Initialled c.1970. Signed on the on Reverse is located in Hookwood, United Kingdom