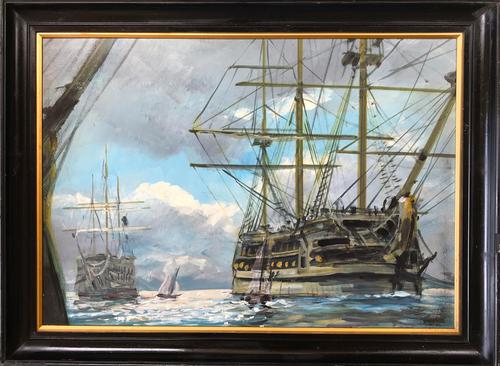 Original Oil on Board 'ships of the Line' by Douglas Ettridge 1927-2009. Provenance; The Ettridge Family

REF: 2874 / LA409548
£140
€165
$170
Secure Payments By
07748631022
Certified DealerApproved listing43 sales by dealerFree Delivery
Certified DealerApproved listing43 sales by dealerFree Delivery
Description
A leading aviation, Marine and motoring artist in oil, acrylic, gouache and watercolour, working in both his native Britain and the United States. Born in North London, as a child he regularly sketched the planes he saw, including the Nazi warplanes over London at the height of the blitz. He left school at sixteen and worked for a commercial artist whilst attending night school. This tuition and support, coupled with his own inherent abilities, enabled him to gain a strong understanding of how to paint almost any subject. In the 1950s Douglas Ettridge became a prominent member of the newly formed Society of Aviation artists, whose members held an annual show at the Guildhall, London. he was in august company as other early members included Gerald Coulson, Terence Cuneo, Roy Nockolds, David Shepherd, Norman Wilkinson and Frank Wootton. He was a member of the London sketch club and exhibited also with the Royal Society of marine artists. By the late 1950s he had moved to the United States, and he achieved considerable success as a painter of aeroplanes, balloons, ships and racing cars in that country. He had an annual exhibition in Los Angeles for very nearly fifty years, and for the past twenty years or more that show was held at the Airtel Plaza Hotel at Van Nuys airport. Ettridge had studios for some years in Santa Barbara, California, and at Worplesdon in Surrey. His work was acquired for many important collections in America, including Frank Sinatra, Danny Kaye, John Travolta, Clay Lacy, the San Diego aerospace museum, the museum of flight, the American Hall of aviation history, Brazilian air ministry, and several major airlines such as Qantas and American Airlines.

21st Century Gallery has clarified that the Original Oil on Board 'ships of the Line' by Douglas Ettridge 1927-2009. Provenance; The Ettridge Family (LA409548) is genuinely of the period declared with the date/period of manufacture being c.1970

The oil painting is in good condition. The frame shows a little wear.

This Original Oil on Board 'ships of the Line' by Douglas Ettridge 1927-2009. Provenance; The Ettridge Family is located in Hookwood, United Kingdom