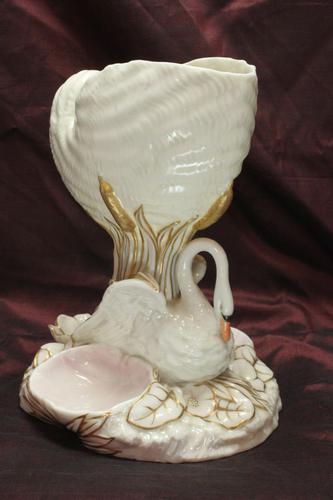 Established by Don and Jenny Patterson in 1992, China Rose Antiques offers a wide range of fine china including Royal Worcester, Wileman and Shelley, Royal Doulton, Moorcroft and much, much more. We also carry a range of sterling silver, treen, boxes and other diverse antiques and collectables. We are situated in Geelong, Victoria, Australia and offer safe and secure packaging and prompt mailing worldwide. In our packing we use a 100% biodegradable and compostable void filler and recyclable cardboard boxes.

REF: 4633 / LA407453
£310
€366
$376
Secure Payments By
+61 407527857
Certified DealerApproved listing
Certified DealerApproved listing
Description
This Swan and Nautilus shell porcelain table centrepiece by Royal Worcester could also be used as a vase - either way, filled with fresh flowers it would look fabulous. The nautilus shell is supported by bulrushes and the swan, which sits amongst flowers and leaves, all on a rocky base. Either side of the swan are wells formed from shells which are coloured a pale pink and would have held sweetmeats or pastilles. The whole piece is finished with a lustre glaze and extensive hand gilding. The base carries the impressed Worcester mark, but there is no date code. It also carries two hand painted numbers in gold which would probably be gilders marks. There is no shape number on the base, but Worcester's early list of shapes is divided into Classes, and in Class 4 - Centres, Baskets and Dessert Ornaments, is number 88 which is just described as Swan and shell.

China Rose Antiques has clarified that the Royal Worcester Swan & Nautilus Shell Table Centrepiece (LA407453) is genuinely of the period declared with the date/period of manufacture being c.1870

There is one small area on the open flower at the rear of the swan where the gilding has rubbed, but overall it is in excellent condition.

A selection of items from China Rose Antiques