Vintage and Antique Beds For Sale

A famous proverb says “if you only buy two things in life buy a good bed and a good pair of shoes. If you are not in one you will be in the other”. When it comes to sleeping nothing compares to antique and vintage beds. Not only do they offer the charm and appeal of years of loving use and beautiful timeless designs, but as one of the most important pieces of furniture in any home they were made of a lasting quality rarely seen today. Indeed, in the Middle Ages the bed was such an important status symbol that the King would regularly see guests while sitting in his bed chamber.

From Four Poster Beds or Brass Beds to French Lit en Bateau or Baby Cribs, there are plenty of antique bed designs to choose from. Although we are used to very standardized sizes today this was not always the case in the past. Most will conform to regular mattress sizes such as King Sized, Queen Sized or Double (or can be easily adapted to fit), but sometimes an antique bed can also be the perfect thing to fit those unusual spaces as well. Alongside regular beds for night-time sleeping are Sofa Beds, Day Beds and Chaise Longues intended for quick naps or just slumbering. Half Sofa and half bed these variations have been around since Classical times and offer just another way to relax around the home. As these items were far more numerous in the past you will always find a far better selection from antique and vintage examples than modern ones.

At LoveAntiques you will find a great selection of Antique and Vintage beds for all your resting needs. 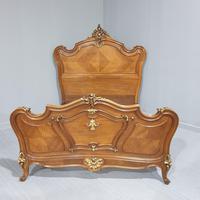 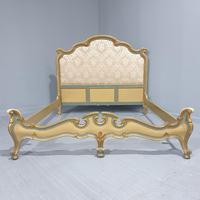 Lovely Pair of Simple All Brass Single Beds - Can be Joined

Lovely Pair of Simple All Brass Single Beds - Can be Joined 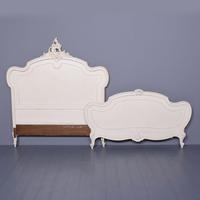 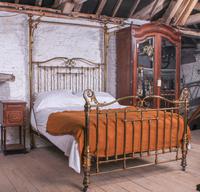 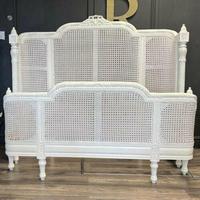 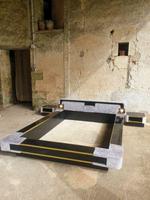 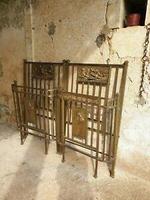 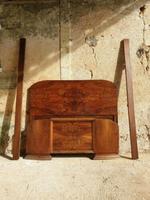 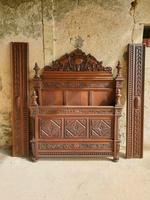 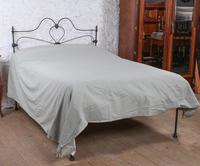 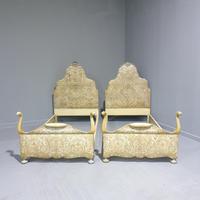 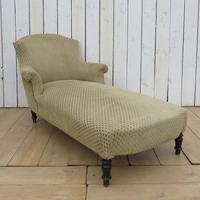 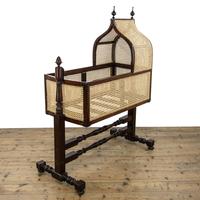 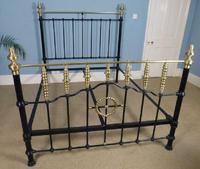 Beds have always been one of the most prized and used items in any home. Antique and Vintage examples were usually very well constructed and thus expensive to purchase. Today these old beds remain just as desirable and useful as ever. Like any item they can be quite valuable costing many thousands of pounds for larger sized quality examples such as four poster or half tester beds, but you can also pick up great examples from al sizes at a fraction of that cost also.

What is a half-tester bed?

Traditional four poster beds or canopy beds were originally called ‘tester’ beds as derived from the Latin word ‘testa’ meaning ‘head’. Over time the fashion and need for fully enclosed beds changed with a desire for more open airy beds instead. Often the two tall bed posts by the head were retained with a small pediment above and purely decorative drapes to create a visually elegant look. This form of bed with only two tall posts and small pediment are called ‘half-tester’ beds.

What are common antique bed sizes?

Although people have always slept on different sized beds from small to very large, popular terms such as Queen, King and Empire did not become universally recognised until the middle of the 20th Century. Instead, most antique beds were created in very similar proportions to our modern terms such as single, double and larger, but were not all exactly the same to the millimetre. Indeed, it was the invention of uniform sprung mattresses in the mid 19th Century which made a universally recognised scale useful. Today, most antique beds can either accept modern mattresses directly or bases can easily be made to fit.

What is a French Style Bed?

Naturally a French Bed will relate to those beds made originally in France, but it is also a term to describe certain classic styles of bed originally made popular in France. These include the very traditional ‘Lit Bateau‘ with tall or Sleigh style ends and box sides, as well as elegant 18th and 19th Century designs with head and footboards finished in a variety of materials including cane work, upholstery and carved from Walnut or Oak. These French designs remain extremely popular today.