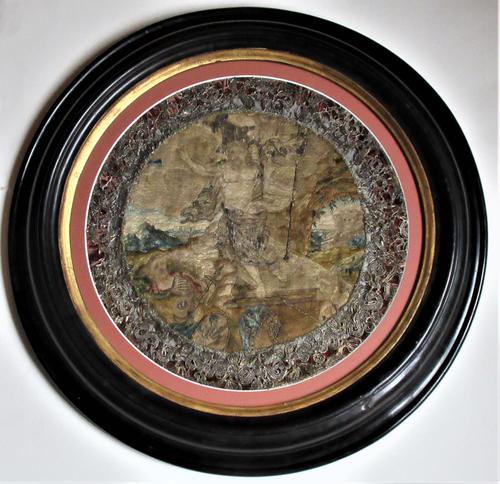 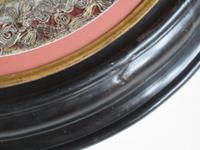 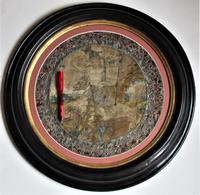 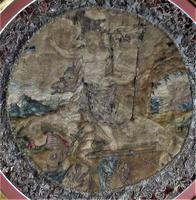 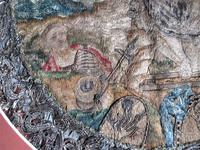 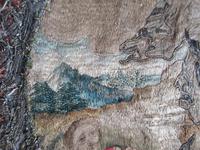 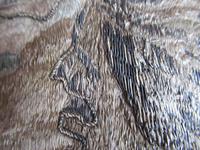 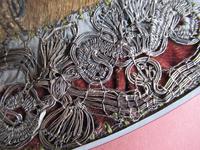 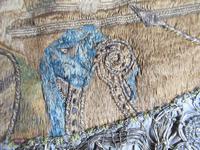 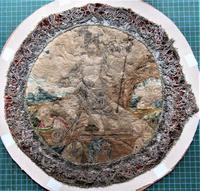 REF: LA381908
£1350
€1614
$1832
Secure Payments By
+44 7785 226316
Secure Payments By
Certified DealerApproved listing50 sales by dealer
Description
This very interesting and unusual fragment appears to be from a larger piece, perhaps an ecclesiastical vestment. The edges (beneath the mount) are somehwat irregular, and the gold and silver thread border has been reattached to the main picture using a new back cloth, although the burgundy cloth appears to be original (please see image provided of the silkwork outside the frame). The materials used are a gold and silver spun thread (metal wound onto a silk core), which is used in the border extensively and also in the picture, particularly within Christ's garments and the accoutrements of the soldiers. Various stiching is used for the silkwork. The scene shown is The Resurrection of Christ, who appears standing on the tomb slab holding a cross with pennant in his left hand, right arm outstretched. Below him are the figures of three Roman soldiers iwth thier weapons and shields, and behind him, beyond the cave, stretches a wooded landscape. It appears that there are some building or ramparts of the hill in the distance, although the silk colours have clearly faded. The manner of the picture and the clear age of the materials points to an early 17th century or possibly late 16th century date, and possibly a French origin. Depictions of the Resurrection inside the cave with a landscape beyond appear to be typical of the late 16th century (e.g. Antoine Caron and Paulo Veronese) and in these Christ almost invariably holds the Triumphal Cross. In this embroidery, Christ appears to be standing on the tomb slab rather than hovering above it, as depictions from the early 16th century often show. In fact the Council of Trent in the mid 16th century objected to the hovering depiction. We have not identified a painting of which this depiction might be a copy. The frame is not original to the piece but complements it nicely. It is an Italian frame of the 19th century in wood with lacquered and gilded gesso. It has some small repairs but overall is in good condition.

Chester's Farm Antiques has clarified that the Early 17th Century Silk, Silver & Gold Needlework Picture, The Resurrection, 19th Century Frame (LA381908) is genuinely of the period declared with the date/period of manufacture being c1600

Good overall condition, some colours faded, some reattachment of the various elements in green silk thread also used to mount on a backing board. Bullion thread somewhat tarnished. 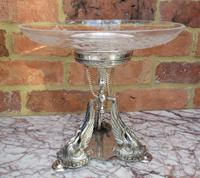 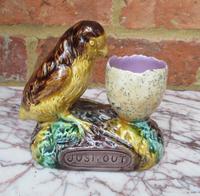