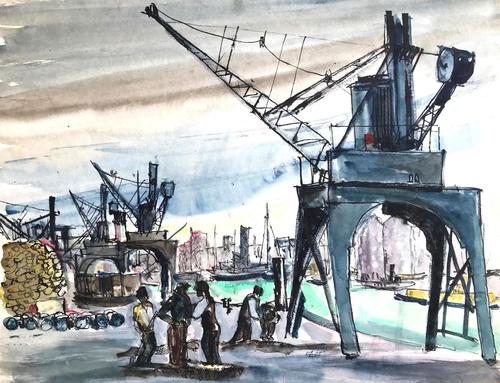 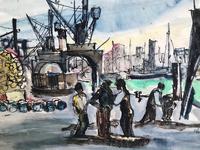 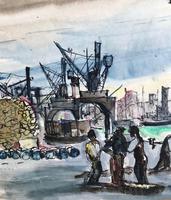 REF: 2865 / LA409141
£750
€885
$911
Secure Payments By
07748631022
Certified DealerApproved listing44 sales by dealerFree Delivery
Certified DealerApproved listing44 sales by dealerFree Delivery
Description
An important Czech artist who found early fame in his own country and Germany but who was forced to flee the Nazi's in 1933. Egon Adler was known as a Munich Expressionist. Born 1892 in Karlsbad, Czechoslovakia studying in Berlin, Munich and Weimer. He had strong ties with the German avant-garde and first exhibited at Der Sturm Gallery in 1912, along with Jan Gauguin and Arthur Segal, and at the First German Autumn Salon in Berlin in 1913. His pointed shapes and thick contour lines were inspired by the works of fellow artists and friends August Macke and Oskar Kokoschka, with whom he had come into contact in Vienna. He was a regular visitor of the Café Arco in Prague, one of the meeting places of avant-garde writers and artists at the time, including those working for important publications associated with German expressionism. He was closely associated with and influenced by such early Munich Expressionists as Franz Marc, August Macke and Alexej von Jawlensky. Some of his earliest pictures were also included in the "Erster Deutscher Herbstsalon" arranged by Herwarth Tvalden in 1913. Later exhibitions were held in Munich and Stuttgart. When the National Socialists came to power in 1933, Adler moved back to Czechoslovakia. In 1938 he fled to Switzerland and emigrated from there to the United States where he died in 1963. Provenance; This painting and one other were given to Antonin Bartl.

21st Century Gallery has clarified that the Original Watercolour 'port Scene with Stevedores & Cargo' by Egon Adler 1892-1963. Initialled & Dated 25 (LA409141) is genuinely of the period declared with the date/period of manufacture being 1925