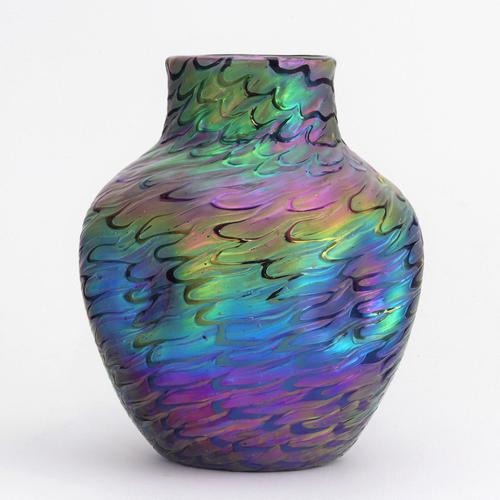 REF: GL220 / LA410050
£525
€620
$637
+44 7841 679518
Certified DealerApproved listing462 sales by dealer
Certified DealerApproved listing462 sales by dealer
Description
Sumptuously iridescent Kralik Secessionist glass vase in the “Fish-Scales” décor c1900. Of shouldered ovoid-form with dimpled sides and cylindrical neck. Scales décor of wavy threads drawn to points, spiralling down the vase. Petrol iridescent finish creating a gorgeous rainbow of colours across the vase. Cobalt blue ground. Ground pontil mark to base. The vase is 16.5 cm in height and 14.5 cm maximum diameter. Kralik Glassworks gets its name from Wilhelm Ritter von Kralik who inherited the glassworks in 1841 from his uncle (Jan Meyr) who was an award winning glassmaker in his own right. On Wilhelm’s death the company was divided between his sons. Karl Kralik retained the Meyr name, gaining recognition for its quality of design and production whilst Heinrich and Johann Kralik formed the company ‘Wilhelm Kralik Sohn’ – producing the glass we generally associate with Kralik. The two companies were united by Heinrich c1922 as ‘Wilhelm Kralik Sohne’ – continuing to produce glass in the Art Deco style. The company closed its doors forever during Wwii yet has managed to preserve a legacy despite an almost complete lack of signed pieces.

Antique Ethos has clarified that the Iridescent Kralik Cobalt Blue Glass Vase in Fish-scales Décor c.1900 (LA410050) is genuinely of the period declared with the date/period of manufacture being c.1900

This vase is in excellent original condition commensurate with age. No chips, cracks or restoration. Very minor surface rubs to decor. Please see images as these form an important part of the description.

Free standard delivery to the UK (4-6 working days). You can checkout securely by debit/credit card on our website where UK standard and express delivery options are available. For delivery outside of the UK – please contact us for shipping costs. We will provide quotes for delivery options valid for three days. Items will be reserved for this period. For full delivery details visit the information page on our website.