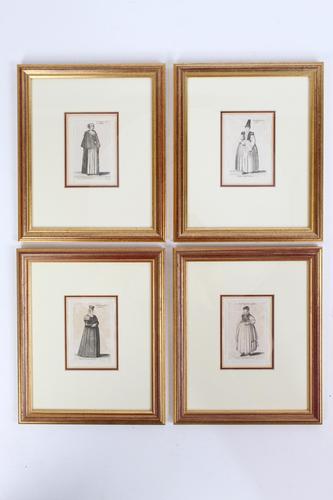 Antique Furniture Direct is well-established family run business selling antique and vintage furniture online. We always try to source pieces of furniture that are individual and authentic and, when necessary, lovingly restore them to meet the demands of the modern home. We pride ourselves on our high level of customer satisfaction. We always strive to provide a super friendly, helpful and efficient service. We are happy to offer advice over the phone or via email to help with any questions you may have about any specific piece of furniture in our online store. Our items are delivered across mainland UK via courier.

REF: LA391637
£395
€467
$483
+44 7528 604958
Certified DealerApproved listing1758 sales by dealer
Certified DealerApproved listing1758 sales by dealer
Description
A set of four small antique 17th century etchings of women from ‘Aula Veneris’ series by Wenceslaus Hollar dating from circa 1650, beautifully mounted and framed in modern gilt wood frames. These charming costume plates are drawn and engraved by Wencelaus Hollar, the renowned seventeenth century engraver who worked in both Germany and England. The etchings are from “Theatrum Mulierum” (The Theatre of Women) with Latin and German titles, depicting women in European national dress. Prints of men and women in costume were a popular genre for collectors of the seventeenth century. Hollar would have seen these simple, small-scale prints as an opportunity to take advantage of that market, and he produced several groups of costume prints in the 1630s and 1640s. Wenceslaus Von Prachna Hollar was a prolific and accomplished Bohemian graphic artist of the seventeenth century. His work embraced a great variety of subjects, including scenes from the bible, historical pictures, maps, portraits of his chief contemporaries, views of cities, flower and fruit pieces, and various illustrations to books. His clever sketches of costume, his views of old London and other cities are invaluable to the historian. His engravings are executed with much spirit and carefully finished. Having produced more than 3000 different prints during his career, his works can be found in every major museum collection from the Metropolitan Museum of Art to the National Gallery in London. Construction/Wood: Gilt Framed

A selection of items from Antique Furniture Direct