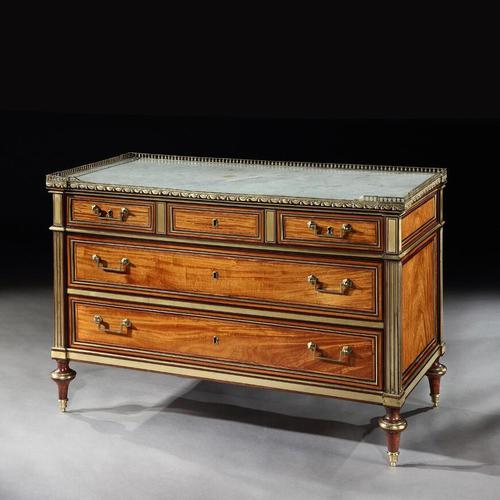 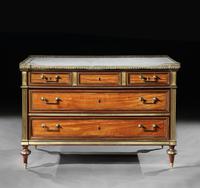 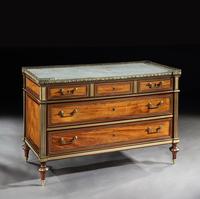 REF: 2689 / LA407855
£42,500
€50,168
$51,598
Secure Payments By
01438869819
Certified DealerApproved listing316 sales by dealer
Certified DealerApproved listing316 sales by dealer
Description
This is a rare and important French Louis XVI gilt bronze-mounted bois citronnier and amaranth marble topped commode firmly attributed to Claude-Charles Saunier (1735-1807), maître in 1752. It is of elegant Neo-Classical design, this commode is finely constructed from choice cuts of bois citronnier (lemon tree wood) often referred to as satinwood, with contrasting amaranth. The white carrara marble top enclosed by a pierced gilt bronze three-quarter gallery above three finely inlaid amaranth-banded and brass moulded drawers, each divided by inset brass panels, over two conforming longer drawers within brass fluted pilasters raise on toupie feet. Having retained a wonderful faded satinwood colour this exception Louis XVI Parisian commode is offered in excellent condition, the locks are later 19th century locks and softs spots on the original marble as to be expected. Very rare to the market this elegant piece exemplifies all the hallmarks of the extremely well known maker Claude-Charles Saunier, who became renowned for his impeccably executed furniture of elegant form with sober neoclassical lines, whilst being made from the finest timber of contrasting woods.The characteristics of his veneered pieces were `sobriety of their line and the beauty of their wood’. The use of lemon trees became fashionable at the end of the 1780s and Saunier used fashionable woods in an interesting, way often making good use of their contrasting colours such as lemon and amaranth. Various pieces in citronnier were supplied by Daguerre in 1786-87 to the Garde-Meuble Royal which would appear to be identifiable as works by Saunier, such as two bonheurs-du jour in `bois jaune' also known as `noyer de Guadeloupe'. There is a secrétaire à abattant in bois jaune from this group which would appear to be the one delivered by Daguerre on 10th March 1787, for the Duke of Harcourt, indistinctly signed although the initials C.C. are clear for C.C. Saunier and with the Versailles Château mark. A flap secretary, also attributed to Saunier and entirely made of amaranth and lemon, was part of the collections of Prince and Princess Henry of the Tour d'Auvergne Lauraguais.

Loveday Antiques has clarified that the Louis XVI Gilt Bronze Mounted Bois Citronnier & Amaranth Commode Claude - Charles Saunier (LA407855) is genuinely of the period declared with the date/period of manufacture being c.1785