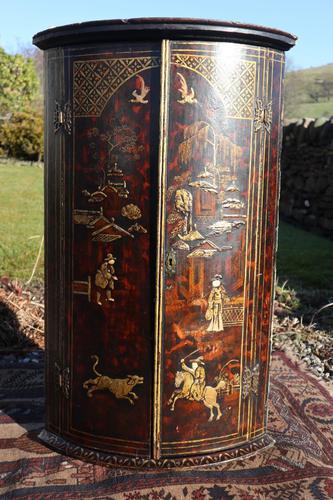 REF: 1994 - 190220 / LA193949
£895
€1045
$1063
Secure Payments By
Certified DealerApproved listing147 sales by dealerFree Delivery
Certified DealerApproved listing147 sales by dealerFree Delivery
Description
For sale is a highly decorative Georgian Bow-fronted hanging corner cupboard in tortoiseshell lacquer (red and black dappled) from 1770-1810. - This simple and beautiful cupboard remains solid, stable and entirely functional in original condition circa 250 years after construction in the Chinoiserie style of the 1700s. - This specific style of cupboard is *Referenced/pictured in: "Millers - Furniture Antique Checklist by Richard Davidson, (1991)" as from circa 1770 onwards. - The Georgian bow-fronted cupboard has blind doors (solid rather than glazed), which were popular through the 18th Century. These corner cupboards were made in a variety of timbers including walnut, mahogany, oak and fruitwoods, with secondary pine wood used as the carcass for the construction andsimply painted. It is reported by Millers, that the backboards being softwood often shrink and split due to changes in temperature and were tape/canvas soaked in glue as a standard method of stabilising such boards (this cabinet has exactly this method as shown in the photographs to both rear quarters potentially some centuries ago. - The hanging cupboard has a gilt painted border and decoration throughout, which frames the raised landscape decoration of pagodas, figures and animals. - The background throughout is an imitation tortoiseshell pattern of red and black lacquer which provides a warm feel, on top of which the gilt chinoiserie raised decoration is overlaid. - The bow-fronted cabinet has exquisite original decorative pierced butterfly hinges and decorative lock in place (but no key). - Three internal shelves plus the base of the cupboard, the top shelf is cutaway to enable a decanter or potentially tea-caddy in period. - The internal surfaces of the cupboard have been painted in a Chinese red at some point in the 250 year history. - The top of the cupbaord has two brass brackets over-painted over many decades to hang the corner cupboard, you can also see the history of house walls and painting through the years where paint along the edge of the cupboard remains when not in place. - The back panel also has two holes where previous screwing to the wall has taken place. - The lacquer is in remarkably good condition given the age of the item and remains consistent throughout, the gilt coloured decoration is strong across the cupboard and presents well. - Some touching up of the faces of two figures on the right door looks to have been undertaken previously. - We have deliberately not attempted to clean any of the pierced brass work/hinges/locks to retain its condition. - This cupboard can also be floor standing, as the doors open without catching the floor due to the decorative lip. **The cupboard is photographed on a green earthenware block, not included in the sale, it is for display purposes only.

Please consider the photographs and description as a great record of the condition of this antique item in original condition.