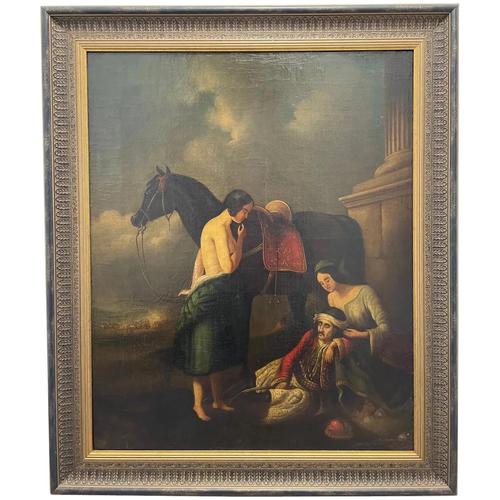 REF: LA405761
£9,500
€11,185
$11,245
Secure Payments By
+44 7494 763382
Certified DealerApproved listing215 sales by dealerFree Delivery
Certified DealerApproved listing215 sales by dealerFree Delivery
Description
Fine important 19th Century work of art Battle Portrait "The Wounded Greek" attributed to Abraham Cooper Ra. Subject portrait of a fallen greek soldier after an intense battle with 2 women who are looking over him and tending the injured man, one kneeling at right supporting his head and the other standing to the left holding the reins of the horse behind, as he lays on the floor holding his curved sword in his right hand, his hat is laying next to him on the floor. Further back his horse is standing upright in side profile facing left waiting looking concerned, wearing a beautiful decorative saddle. To the right you can view part of an ancient marble temple building. In the distant background to the left you can see clouds of dust from running horses and other warrior figures, with grey sky overhead. Oil on canvas. Title "The Wounded Greek". Reference source, British Museum the 'Illustrated London News', 26 May 1849, p.348. 1849. British Museum number 1856,0913.127. Unsigned. Attributed to the British artist Abraham Cooper Ra (1787–1868) was a British animal and battle painter. The son of a tobacconist, he was born in Greenwich, London on the 8th September 1787.At the age of thirteen he became an employee at Astley's Amphitheatre, and was afterwards a groom in the service of Henry Meux, a brewer and later the first of the Meux baronets. When he was twenty-two, wishing to possess a portrait of a favorite horse under his care, he bought a manual of painting, learned something of the use of oil-colours, and painted the picture on a canvas hung against the stable wall. His master bought it and encouraged him to continue in his efforts. He accordingly began to copy prints of horses, and was introduced to Benjamin Marshall, the animal painter, who took him into his studio, and seems to have introduced him to the Sporting Magazine, an illustrated periodical to which he was himself a contributor. In 1814 he exhibited his Tam O'Shanter, and in 1816 he won a prize for his Battle of Ligny. In 1817 he exhibited his Battle of Marston Moor and was made associate of the Royal Academy, and in 1820 he was elected Academician. Cooper, although ill-educated, was a clever and conscientious artist; his colouring was somewhat flat and dead, but he was a master of equine portraiture and anatomy, and had some antiquarian knowledge. He had a special fondness for Cavalier and Roundhead pictures. He died on the 24th December 1868 and is buried at the top of the western side of Highgate Cemetery (plot no.830), against the north wall. An exceptional artwork. Set in a later ornate gilt frame, with hanging thread on the back ready for immediate home wall display. Provenence purchased from a fine antique art auction. Such an impressive imposing scene to the eye. Highly sought after due to the collectible nature of the subject matter. Incredible conversation piece for your guests. We only select & sell paintings based upon quality & significance. We understand your purchase is for your home or as an investment. We provide our clients with friendly professional customer service. Viewings are welcome by appointment only for customer support please send a message thank you. Checkout our exciting other available collections in our shop gallery, happy shopping.

Offered in fine used condition. Front painting surface has various signs of craquelure, scuffs & some paint loss in places. Various foxing to the back of the canvas. Set in a later gilt frame which has general wear and in good overall order commensurate with usage & age. 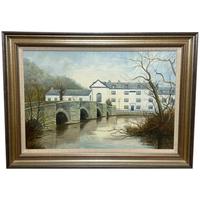 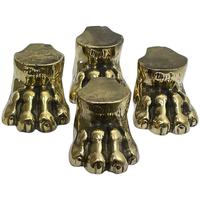 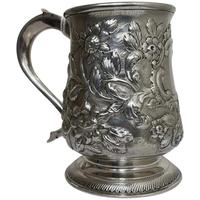 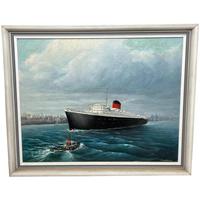 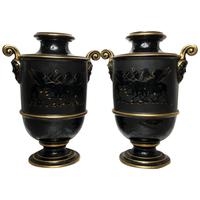 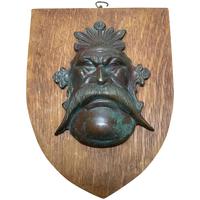