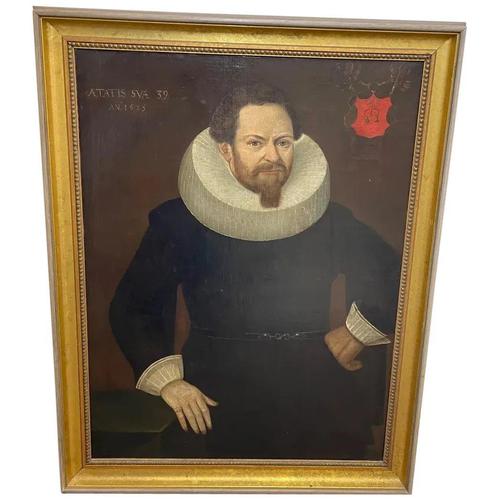 REF: LA430072
£8,000
€8,960
$9,845
+44 7494 763382
Certified DealerApproved listing283 sales by dealerFree DeliveryAvailable for local pick-up
Certified DealerApproved listing283 sales by dealerFree DeliveryAvailable for local pick-up
Description
Fine large early 17th Century antique oil painting on canvas portrait of Important Dutch Golden Age Merchant Gentleman - Three quarter length front profile view portrait of a wealthy bearded Dutch Merchant Gentleman. He is wearing an elaborate wide white ruff lace collar cuffs and having a sumptuous black costume which is the highest fashion for the period and indicated the sitter is of significant importance and wealth in Dutch society. He has such a powerful pose by his standing posture with 1 arm leaning over a table and his other hand placed on his hip, he is looking directly at the viewer. He has a well groomed brown beard & hair. You can see he is wearing a gold ring on his little finger and is wearing a chained loop belt. Furthermore to the top right section of the painting is a fabulous cartouche containing winged cherubs on either side with a pictorial of a key, which is so unusual & intriguing. Hanging wire thread on the back ready for immediate home wall display. Latin inscription Atatis Suae 39, Ani 1625`. Unsigned by A Dutch School artist. Circa 17th century dated 1625, the sitters age is also stated as being 39 in his prime when he was painted. Provenance formally from a large mansion home in Cheshre and purchased from a fine art auction label verso. A great conversation & statement work of art. In just over one hundred years, the provinces of the Northern Netherlands went from relative obscurity as the poor cousins of the industrious and heavily urbanized Southern Netherlands provinces of Flanders and Brabant to the pinnacle of European commercial success. Taking advantage of a favorable agricultural base, the Dutch achieved success in the fishing industry and the Baltic and North Sea carrying trade during the fifteenth and sixteenth centuries before establishing a far-flung maritime empire in the 17th Century. In many respects the 17th Century Dutch Republic inherited the economic successes of the Burgundian and Habsburg Netherlands. For centuries, Flanders and to a lesser extent Brabant had been at the forefront of the medieval European economy. An indigenous cloth industry was present throughout all areas of Europe in the early medieval period, but Flanders was the first to develop the industry with great intensity. A tradition of cloth manufacture in the Low Countries existed from antiquity when the Celts and then the Franks continued an active textile industry learned from the Romans. Industries also developed as a result of overseas colonial trade, in particular Amsterdam’s sugar refining industry. During the sixteenth century, Antwerp had been Europe’s most important sugar refining city, a title it inherited from Venice once the Atlantic sugar islands began to surpass Mediterranean sugar production. Once Antwerp fell to Spanish troops during the Revolt, however, Amsterdam replaced it as Europe’s dominant sugar refiner. The number of sugar refineries in Amsterdam increased from about 3 around 1605 to about 50 by 1662, thanks in no small part to Portuguese investment. Dutch merchants purchased huge amounts of sugar from both the French and the English islands in the West Indies, along with a great deal of tobacco. Tobacco processing became an important Amsterdam industry in the seventeenth century employing large numbers of workers and leading to attempts to develop domestic tobacco cultivation. Building on the early successes of their Baltic trade, Dutch shippers expanded their sphere of influence east into Russia and south into the Mediterranean and the Levantine markets. By the turn of the seventeenth century, Dutch merchants had their eyes on the American and Asian markets that were dominated by Iberian merchants. The ability of Dutch shippers to effectively compete with entrenched merchants, like the Hanseatic League in the Baltic, or the Portuguese in Asia stemmed from their cost cutting strategies (what de Vries and van der Woude call “cost advantages and institutional efficiencies,” Dutch Finance The last sector that we need to highlight is finance, perhaps the most important sector for the development of the early modern Dutch economy. The most visible manifestation of Dutch capitalism was the exchange bank founded in Amsterdam in 1609; only two years after the city council approved the construction of a bourse (additional exchange banks were founded in other Dutch commercial cities). The activities of the bank were limited to exchange and deposit banking. A lending bank, founded in Amsterdam in 1614, rounded out the financial services in the commercial capital of the Netherlands. The ability to manage the wealth generated by trade and industry (accumulated capital) in new ways was one of the hallmarks of the economy during the Golden Age.The Dutch Golden Age lasted from roughly 1580, when the Dutch proved themselves successful in their fight with the Spanish, to about 1670 - Ref source Donald J. Harreld, Brigham Young University. We select & sell our paintings based solely upon subject, quality & significance. We offer our clients exceptional professional customer service. Viewings are welcome by appointment only for customer support please send a message thank you. Browse our other exciting collections available in our shop gallery, happy shopping.

Offered in fine used condition. The painting surface has various craquelure, repairs to the upper right side and some paint re-touching to the collar area, also some paint loss. Set in magnificent later gilt frame which was made in Sweden shown verso, having some general wear minor chips in places commensurate with usage & age. 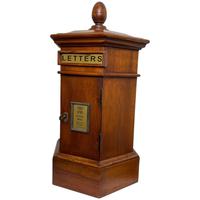 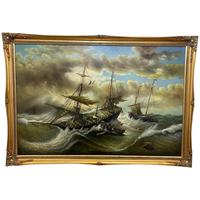 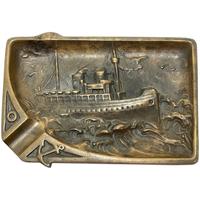 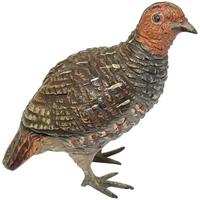 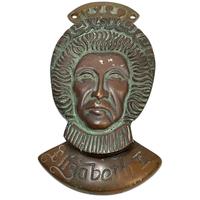 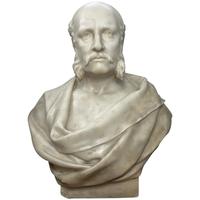