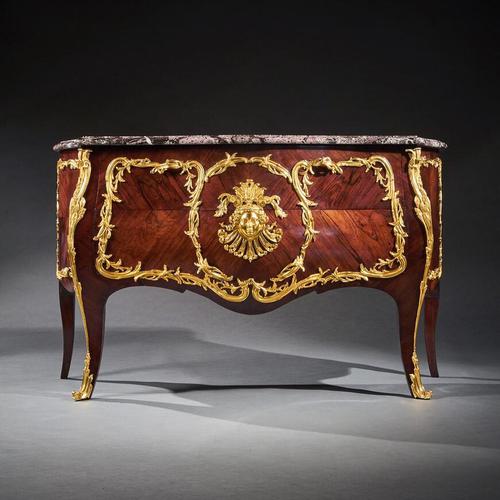 REF: 2882 / LA407770
£16,800
€19,856
$20,357
Secure Payments By
01438869819
Certified DealerApproved listing316 sales by dealer
Certified DealerApproved listing316 sales by dealer
Description
This is a fine French Parisian 19th Century gilt bronze mounted marble topped rosewood bombe commode ink marked Hopillart & Leroy Paris. An impressive commode of imposing bombe form with finely coloured quarter veneered rosewood and entwined foliate and scroll mounts. The shaped and moulded 1 1/4 inch thick Breche Du Benou marble top above two drawers sans traverse centred by a female mask within a tripartite scrolling frame, with conforming sides, raised on splayed feet ending in gilt sabots. The top of the carcass with stencil markings Meubles Et Bronzes Anciens / Hopillart & Leroy Paris 12 Rue Des St Peres. The Maison Hopillart was established in 1781 and still operates on the Rue des Saints- Pères under the name of Galerie Hopilliart Leroux. Marcel Proust was one of their more famous clients, purchasing numerous items there and even selling some of his own furniture through them. In a 1912 letter to his friend, the composer Reynaldo Hahn, Proust mentions a pair of tables de salon that Hahn examined for him at Hopillart.

Loveday Antiques has clarified that the French 19th Century Louis XV Style Ormolu Mounted Commode by Hopillart & Leroy Paris (LA407770) is genuinely of the period declared with the date/period of manufacture being c.1860

In wonderful condition with a superb faded colour to the rosewood veneers with contrasting gilt ormolu. The top having a finely coloured and superbly figured rare marble, there has been an extremely professional historic repair / strengthening which is only visible to the underside.