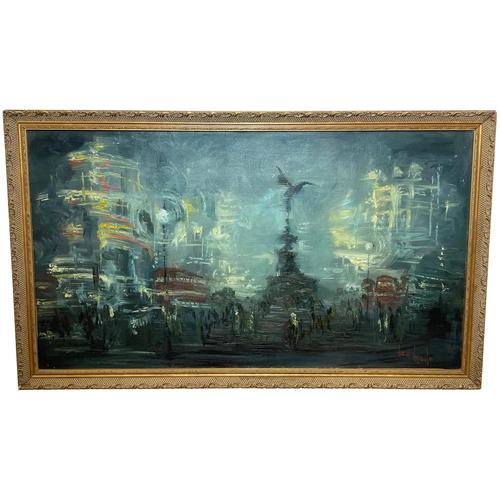 REF: LA406619
£1,295
€1,531
$1,569
Secure Payments By
+44 7494 763382
Certified DealerApproved listing213 sales by dealerFree Delivery
Certified DealerApproved listing213 sales by dealerFree Delivery
Description
A Large Fine Original British Art 20th Century Oil Painting Famous Popular Cityscape Piccadilly Circus At Night In London Signed Ben Maile. Subject impressionist style view of the the historic landmark Piccadilly Circus is one of London's most popular tourist destinations. In the foreground with various figures around the famous statue of Eros a popular meeting point. With street lights illuminated and red london buses along with buildings in the backrgound. It has a great sense of atmosphere, intruque and mystery as its night time, From this location, you can easily walk to Piccadilly, Leicester Square, Shaftesbury Avenue or Regent. Signed the known artist British Ben Maile. Such a collectable and sought after work of art. Ben Maile is a 20th-century British painter best known for his realistic depictions, characterized by an atmospheric sense of light, Maile’s paintings incorporates both heavy lines and misty areas of tonal color to produce an effect of realism suspended in a dream-like state. Born in 1922 in United Kingdom, Maile’s works are in the collections of the Mary Rose Museum in Portsmouth, the Cheshire Military Museum in Chester, and the British Postal Museum and Archive in London, among others. The artist lives and works in Ireland. Ben Maile had his first London Exhibition at Upper Grosvenor Gallery in 1959. He has for many years been one of the top selling artists in the UK and painted in a very personal and distinctive impressionist style. His work is collected around the world and features in the collections of the Royal family, Prime Ministers, a Us President and a Sultan. His family moved to London in 1936 when Ben was fourteen. He joined the Raf, becoming a wireless operator in Bomber Command. He moved to Newquay shortly after 1945 and, self-taught, began painting and exhibiting throughout the West Country. Over time his reputation grew and by 1989 he had an agent in the USA. Ben Maile died in Cornwall in 2017 at the age of 94. Set in a rather ornate gilt frame. Hanging thread on the back ready for home display. Provenance bought from a fine auction collectibles sale label verso. We select & sell our paintings based solely upon quality, subject & significance. We offer our clients exceptional professional customer service. Viewings are welcome by appointment only for customer support please send a message thank you. Browse our other exciting collections available in our shop gallery, happy shopping.