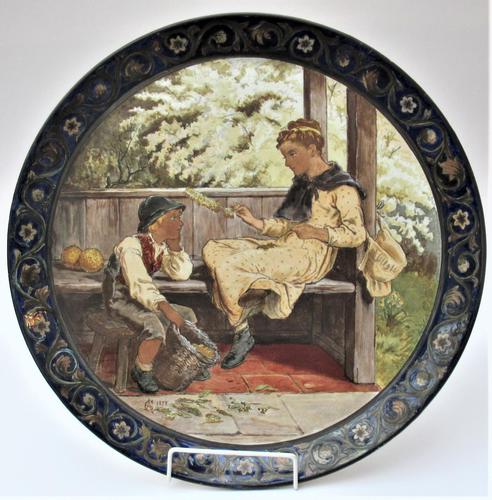 We deal in small antiques such as ceramics, silver, jewellery and glass, as well as pictures and books. Much of our stock is from around 1900 in date, but our focus is on things of decorative appeal and historical interest from any period. We want our customers to be delighted with anything they purchase from us. We are happy to accept returns for any reason but unless we have incorrectly described the item we would ask you to pay for shipping if you do return it. For our full terms of business please see our website www.cfantiques.co.uk... See more
View Dealers Items

REF: LA327658
£675
€787
$817
Secure Payments By
+44 7785 226316
Certified DealerApproved listing448 sales by dealer
Certified DealerApproved listing448 sales by dealer
Description
Height : 52.5 cm (20.5 inches) in diameter. Condition: Very good condition, no chips, cracks or restoration. This is a lovely piece is painted by Catherine Adelaide Sparkes, who with her husband occupies an important position in the history of the Doulton Lambeth Art Pottery and women's art of the late 19th century. The charger is painted, within an Arts and Crafts style border, with a scene entitled The Cowslip Ball. Sparkes has signed her monogram and the date 1877 on the painting, and her full name on the back, with the title of the scene. Cowslip balls were made from cowslip flower bound tightly together into a ball. They were also called "tisty-tosties" and were used in May processions, dangling from a string or thrown to and fro to a nursery rhyme. Is this a girl in the picture, making up the ball with her little brother's help? The charger is earthenware, finished on the back with a transparent glossy glaze with light crazing overall, and three hanging holes (not drilled). The upper side is mainly painted in glaze colours, and looks like it has been finished with the same clear glaze, but that glaze has fused with the glaze colours to leave a fairly matt surface (unlike later Doulton faience which has an overall glossy finish). It is possible that the darkened faces of the two boys suggest a slight amount of over-firing. Catherine Sparkes was the wife of John Sparkes, who as a young art teacher had been a key figure in the development of the Doulton Lambeth Art pottery, and also fostered the talents of potters such as George Tinworth and Robert Wallace Martin. At the time this charger was painted, John Sparkes had recently been appointed Headmaster at the National Art Training School in South Kensington. He had also designed many items for Doulton in the pottery's early years, and the life of the Lambeth School of Art and Doulton had become symbiotic. Catherine had been a student of Sparkes at the Lambeth School of Art, and worked as a freelance artist and designer, producing book illustrations and stage sets as well as working for Doulton. Her husband had helped to introduce the idea of faience pottery to Doulton, and in 1876 Catherine painted a large faience tile panel showing the Pilgrim Fathers, which was exhibited by Doulton on their stand at the Philadelphia Exhibition. Catherine died in 1891, 16 years before her husband, and he bequeathed his whole estate in Surrey to a fund for the Royal Academy devoted to women artists and students. Both as a devoted husband and a teacher of the many talented women who worked for Doulton, Sparkes knew how difficult it was for women of his time to follow an artistic career. When this charger was painted, Doulton faience was still in relative infancy, although experiments had been going on for a few years. Earthenware blanks had been purchased first from Pinder, Bourne & Co in Burslem, Staffordshire and then from 1877 from Doulton in the same town. This charger has no marks for either Pinder & Bourne or Doulton and we are not aware that a blank of this large size was produced by those firms. We are aware however of a later copy of this design used on Doulton faience ware, slightly smaller and without the border. It seems highly probable that this charger was painted for Doulton by Sparkes, possibly for exhibition. Whatever its own story, this is a superb example of the artistic input, of women in particular, into pottery during the 1870's, a time when, as Christopher Dresser said, the events at Doulton showed for the first time "the artist controlling the manufacturer". (Literature: The Doulton Lambeth Wares, Desmond Eyles, 2002 and John Charles Lewis Sparkes 1833-1907, Alex Werner, Decorative Arts Society Journal No 13, 1989)

Chester's Farm Antiques has clarified that the Rare Pottery Charger Painted by Catherine A Sparkes, 1877, Probably for Doulton (LA327658) is genuinely of the period declared with the date/period of manufacture being 1877

This Rare Pottery Charger Painted by Catherine A Sparkes, 1877, Probably for Doulton is located in Nottingham, United Kingdom 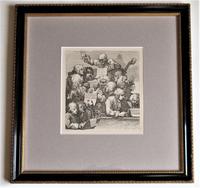 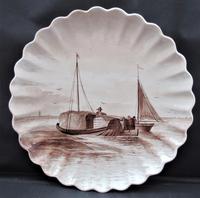 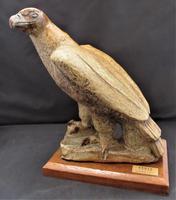