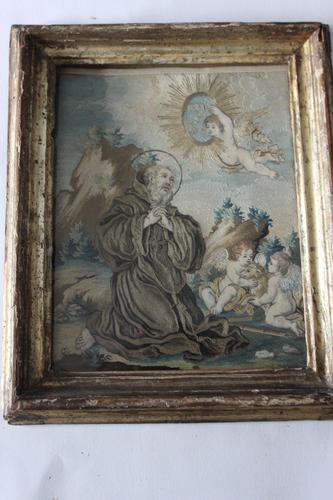 REF: Vm 1081 / LA374470
£800
€941
$1062
Description
Spanish Embroidered and Painted Silk Panel Depicting Saint Francis Paola. Late 18th Century Probably Spanish San Francis of Poloa Hand Painted And Embroidery -Saint Francis of Paola. Elderly and bearded, he is humbly dressed and appears to bear the weight of his calling on with his slender walking staff is broken. St. Francis was born to parents who were childless for many years. Yet the parents pleaded through the intercession of St. Francis of Assisi that they should be given children by God. And so their prayers were heard. They had three children, of which St. Francis of Paola (Paula) was one of them. As a young boy, St. Francis journeyed to Rome on a pilgrimage to Rome and Assisi and decided to follow the will of God and become a hermit. Before he was even 20 years old he began to attract followers and thus founded the Hermits of Saint Francis of Assisi, who were approved by the Holy See in 1474. In 1492 they were renamed the Franciscan Order of Minim Friars, with the use of "Minim," which meant that they counted themselves as the least worthy of those in the household of God. St. Francis was regarded as a miracle worker, prophet, and defender of the poor. In 1464 St. Francis wanted to cross the Straits of Messina to reach Sicily, but a boatman refused to take him. St. Francis responded by laying his cloak on the water, tying one end to his staff to make a sail, and then he proceeded to sail across with his companions. Franz Liszt wrote a piece of music inspired by the incident. At the request of Pope Sixtus Iv, he journeyed to Paris and helped Louis Xi prepare for death. He also used his position to help restore peace between France and Brittany by advising a marriage between the ruling families and between France and Spain by persuading Louis Xi to return some disputed land. St. Francis had a love for animals and took a vow to never eat any animals, even fish. According to his biographers, it is said: "Francis had a favorite trout that he called ‘Antonella.’ One day, one of the priests, who provided religious services, saw the trout swimming about in his pool. To him it was just a delicious dish, so he caught it and took it home, tossing it into the frying pan. Francis missed ‘Antonella’ and realized what had happened. He asked one of his followers to go to the priest to get it back. The priest, annoyed by this great concern for a mere fish, threw the cooked trout on the ground, shattering it into several pieces. The hermit sent by Francis gathered up the broken pieces in his hands and brought them back to Francis. Francis placed the pieces back in the pool and, looking up to Heaven and praying, said: ‘Antonella, in the name of Charity, return to life.’ The trout immediately became whole and swam joyously around his pool as if nothing had happened. The friars and the workers who witnessed this miracle were deeply impressed by the miracle." St. Francis also raised his pet lamb from the dead after it had been killed and eaten by workmen. "Being in need of food, the workmen caught and slaughtered Francis’ pet lamb, Martinello, roasting it in their lime kiln. They were eating when the Saint approached them, looking for the lamb. They told him they had eaten it, having no other food. He asked what they had done with the fleece and the bones. They told him they had thrown them into the furnace. Francis walked over to the furnace, looked into the fire, and called ‘Martinello, come out!’ The lamb jumped out, completely untouched, bleating happily on seeing his master." St. Francis of Paola died on Good Friday, April 2, 1507, in Plessis France. He died as the Passion according to St. John was read to him. He was canonized in 1519 by Pope Leo X. Tragically, in 1562 Huguenots (Protestant heretics) broke open his tomb, found his body incorrupt, and burned it; the bones were salvaged by Catholics, and distributed as relics to various churches. Collect: O God, the exaltation of the lowly, who hast raised Thy blessed Confessor Francis to the glory of the Saints; grant, we beseech Thee, that by his merits and example we may happily obtain the rewards promised to the lowly. Through Our Lord. An alternative story claims Francis laid down his cloak on the water, tied his staff to one end of it, and then sailed across the water on his cloak. For this reason, St. Francis of Paola is regarded as the patron saint of boatmen, mariners, and sailors. Following the request of Pope Sixtus Iv, Francis traveled to Paris to help Louis Xi of France prepare for his death. While ministering to the king, Francis was able to influence the course of national politics. He helped to restore peace between France and Brittany by advising a marriage between the ruling families, and between France and Spain by persuading Louis Xi to return some disputed land. Francis died while at the French court. Francesco da Paola died on 2 April 1507 in Plessis-Les-Tours, near Tours (F) where he was buried: it was a Good Friday and he was 91 years old.

Vintage Midcentury has clarified that the Spanish Embroidered & Painted Silk Panel Depicting the Saint Francis Piola (LA374470) is genuinely of the period declared with the date/period of manufacture being c.1780

Good Frame - Original Condition some wear and tear as per age - please see the photos. Other high res photos on request.

A selection of items from Vintage Midcentury 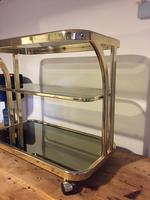 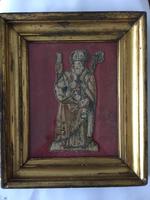 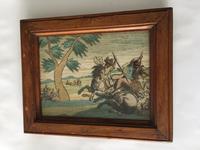