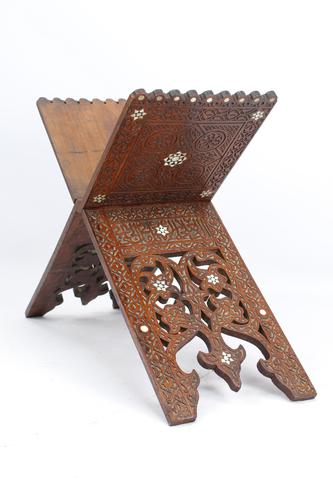 Antique Furniture Direct is well-established family run business selling antique and vintage furniture online. We always try to source pieces of furniture that are individual and authentic and, when necessary, lovingly restore them to meet the demands of the modern home. We pride ourselves on our high level of customer satisfaction. We always strive to provide a super friendly, helpful and efficient service. We are happy to offer advice over the phone or via email to help with any questions you may have about any specific piece of furniture in our online store. Our items are delivered across mainland UK via courier.

REF: LA405529
£225
€266
$273
+44 7528 604958
Certified DealerApproved listing1760 sales by dealer
Certified DealerApproved listing1760 sales by dealer
Description
A magnificent antique Quran stand dating from the late 19th century, ideal as a newspaper or magazine stand. This beautiful folding lectern, or ‘rahla’, was made in the Middle East during the late 19th century from intricately carved hardwood (similar to teak) and inlaid with mother of pearl. It has a section of script to the base and is cut from a single piece of wood, interwoven through slots so that it folds and unfolds. Although the form is of a Quran stand, these were often made for British customers for use as magazine or newspaper stands. These types of stands were also imported and retailed by Liberty & Co in the late 19th Century as illustrated in their 1860-90s catalogues. The carving and inlay on this example is particularly good. Construction/Wood: Carved Hardwood

Antique Furniture Direct has clarified that the Victorian Newspaper Stand / Quran Stand (LA405529) is genuinely of the period declared with the date/period of manufacture being c.1880

A selection of items from Antique Furniture Direct