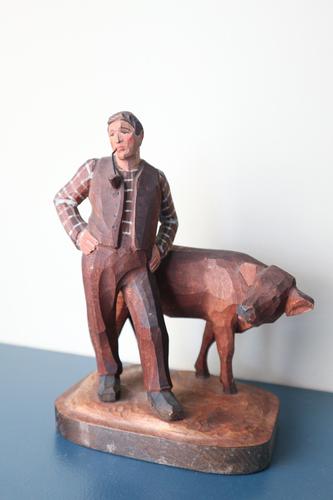 REF: 2047 - 010720 / LA215029
£225
€263
$267
Secure Payments By
Certified DealerApproved listing147 sales by dealerFree Delivery
Certified DealerApproved listing147 sales by dealerFree Delivery
Description
For sale is a charming decorative Swiss 'folk art' carved figure of an alpine farmer and cow from circa 1920-1940. - The figures are both well carved and realistic from the high quality craftspeople and recognised workshops of masters in Swiss woodcarving art Huggler-Wyss in Brienz. The pair are part of a classic old huggler tribe range based on individuals and characters noted from the town and on which these delicately carved linden wood carvings were modelled. They were sold from the early 20th Century. So each one is individually modelled. - They are warmly painted and full of individual character. The farmer is smoking his pipe while he and the calf look at something together both on a carved flat base, which may indicate these being earlier in this range from the first quarter of the 20th Century. - He stands in his waistcoat over a painted checked shirt coloured in soft warm, earthy tones. - Swiss folk art flat cut carvings have been producing in Brienz from 1900 onwards. Huggler-Wyss sculptors have been carvings figures in the classic Swiss style for generations. The origins of the Huggler-Wys carvings are from talented woodcarver Johann Huggler who became famous as the king of woodcarving of Brienz. He recognised the talent of his son Hans Huggler (1877-1947), In 1915 he also designed the first nativty scenes, using "real" people around him as his inspiration. - The man is shown in an image from a sales booklet from the 1930's as figures number 13. - The farmer figure stands 6" tall next to the cow on a 4-1/2" inch carved base.

W&W Antiques has clarified that the Vintage 'Folk Art' Black Forest Swiss Classical Character Carving by Huggler-Wyss, 'Farmer & Calf' c.1930 (LA215029) is genuinely of the period declared with the date/period of manufacture being c.1930

Please consider the photographs and description as a great record of the condition of this antique item.

Free delivery to the UK mainland as priced. International buyers are welcome, but please contact us prior to payment to confirm the additional packaging, insurance and shipping costs by way of acceptance to your country. Purchaser responsible for local import tariffs/fees. If you are interested in multiple items, please contact us for combined postage. Visit our website at: www.wandwantiques.com and subscribe for new acquisitions Follow us at: @wandw_antiques https://www.instagram.com/wandw_antiques/