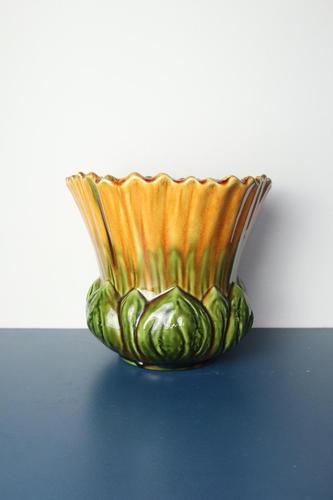 REF: 3035 - 220821 / LA363911
£195
€222
$241
Secure Payments By
Certified DealerApproved listing164 sales by dealerFree Delivery
Certified DealerApproved listing164 sales by dealerFree Delivery
Description
For sale from W&W Antiques is this bold and beautiful flori-form jardinière from the Ault pottery c.1890-1900. - Beautiful bold aesthetic with striking and bold yellow and green/brown drip glaze blurring together from the inside blue to the dark green/brown base. - Raised moulded mark for the Ault pottery, England and Convolvulus to the base as shown in the images, alongside series numbers. - The jardinière is in good condition with no chips or cracks, just strong colours throughout in a beautiful aesthetic manner. - The jardinière has some minor surface wear crazing to the glaze in parts through age and use, rough indentations to the base as shown by the images where it was lifted (post firing) from the kiln. William Ault set up his pottery in Swadlingcote, Staffordshire, in 1887 when he left Bretby at the age of forty-six. Ault was best known for his inventive use of coloured glazes. Christopher Dresser designed for him in the 1890s. Dresser teamed with Ault in 1892 and contributed designs to Ault until 1896. New Dresser designs continued to be manufactured by Ault until 1909, five years after Dresser's death.

W&W Antiques has clarified that the Arts & Crafts Ault Art-pottery Floriform 'Convolvulus' Jardinière c.1895 (LA363911) is genuinely of the period declared with the date/period of manufacture being 1895

Please consider the photographs and description as a great record of the condition of this antique item. 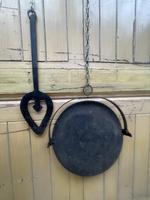