The Sowerby Glassworks began production at the start of the 19th Century, but rose to prominence during the last quarter of the century under the influence of John Sowerby who joined the family firm in 1871. John was a noted artist himself and through his connection with the leading designers of the day including Christopher Dresser and Walter Crane the Sowerby name came to represent mass-produced artistic glass. At the time the firm specialised in coloured pressed glass which looked like ceramics. Despite their earlier success the firm struggled during the first half of the 20th Century eventually closing their doors in 1972.

﻿While Sowerby glass used overtly mechanised processes their antique and vintage pieces are still admired by collectors for their decorative appeal and reproduction of leading 19th Century designers. At LoveAntiques we have a good selection of Sowerby glass at competitive prices. 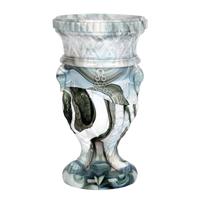